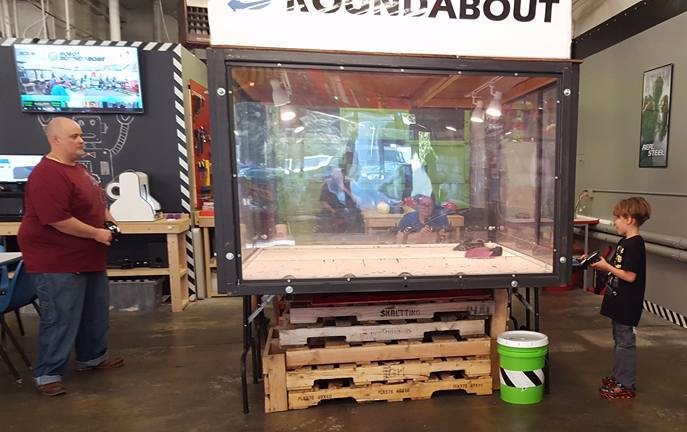 The kids’ birthday is coming up so naturally I’m pushing forward as if everything is normal, you know, calling twelve different venues to find a place to have the party and Pinterest-ing like crazy for cake and decoration ideas.

Then I am punched in the stomach.

Last year we held the birthday at a robotics place called Robot Roundabout.  It was awesome.  They had a lot of different kinds of robots to play with, but the big attraction was the Battle Bot cage.

Inside the little arena are two bots.  Each bot has a spike on the front and balloon on the back.  I’m sure you can do the math on that one.  Well, the second Trey and I saw that, we were like, “You and me, bud!  As soon as these kids have all had a turn, you are going down!”

Sure enough once the kids had all had a turn and were happily eating pizza and cake, Trey and I raced to the Battle Arena.  The guy running the place was thrilled.  We battled and hollered and smack talked and the kids cheered and then my balloon got punctured.  But it was a slow leak!  The judge’s determination was that I was still in play until it fully deflated.  I chased Trey around and popped his balloon before mine ran out of air and I whooped and did a victory dance and it was so awesome.

Afterward the guy who runs the place said that he always asks the parents to have a go at the battle bots because it’s fun for the birthday kids to see his parents battle.  He said that he usually has to work to talk them into it, and we were the first couple he’d ever seen that ran over to it and wanted to play and had so much fun.

We were so confused.  How could anybody not want immediately to kick their significant other’s ass at battle bots?  We told him that if he would let us, we’d kick all those kids out of there and just play the two of us for the next hour.  Who wouldn’t want to play robots with their best friend?

Do you see why I’m bawling?